I enjoyed a week of vacation out of the Chesapeake Bay watershed in the Western Maryland mountains, and managed to miss the torrential rainfall and flooding from Tropical Storm Lee.

But Lee greeted me as soon as I returned to work this past Monday. As I caught up on e-mails, voice mails, Twitter and Facebook, I realized a lot of people were talking about all the trash and junk and sediment floating down the bay courtesy of Lee.

Of course, that’s a tough story to do wearing a dress and cute wedge sandals, which is what I was wearing. Normally that’s not a big deal, as my trunk is usually stocked with all kinds of outdoors gear.

But not on Monday.

I had cleaned out my car for my vacation road trip and so I had not a single bit of spare outdoors clothes. Just as I realized I’d have to go home to change, a boat trip to see the debris first-hand started to come together.

I think I may have set a cross-county, land-speed record (safely, of course!) jetting home to change and to get back in time to meet my boat. At the last minute, the departure site and time was changed, giving me another half-hour or so.

I eventually hopped aboard a Boston Whaler owned by John Page Williams, a naturalist with the Chesapeake Bay Foundation. Also on the trip were Alex Dominguez from the Associated Press and Joel McCord of WYPR radio, two fellow reporters who cover the environment frequently.

We motored out of Sandy Point State Park, where the water was quite murky and there was a bit of floating debris. When we made it past the jetty into the open bay, the site was astonishing. It was like a huge floating debris field. My jaw just dropped.

Thankfully, a lot of the debris — which came the Susquehanna River and through the floodgates at the Conowingo Dam — was sticks and trees and the like.

But there was plenty of trash in there, too, as I described in my story.

When I was going through my photos back in the newsroom, I kept saying, “Ewww” and “Yuuuuck.”

Here are some photos of the trip that didn’t make the paper. 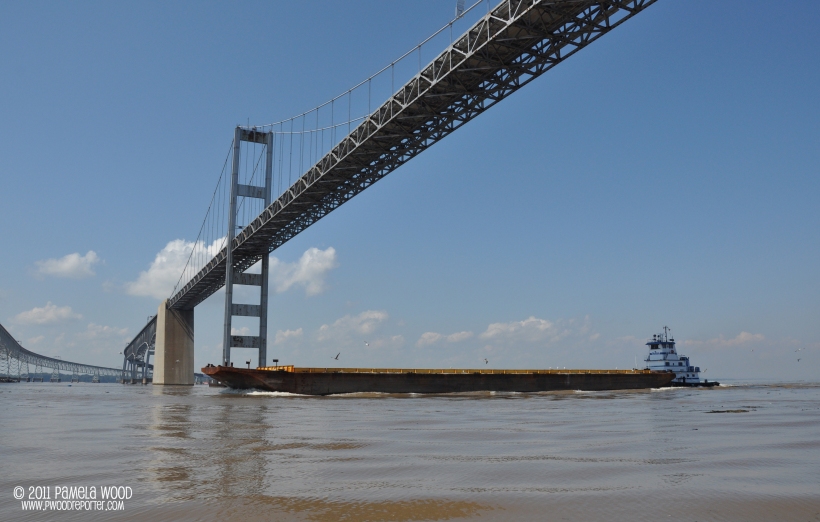 And for fun, my traveling companions: