The Department of Natural Resources arranged for Gov. Martin O’Malley to have lunch at a local seafood restaurant to drum up interest in next week’s “From the Bay, For the Bay” restaurant promotion.

The deal is that restaurants offer special Maryland seafood dishes, and for each dish sold, the restaurant donates $1 to oyster restoration.

I already had written about the promotion, so I just went to the lunch to check it out, maybe make a photo and to ask the governor questions on another topic. I wrote a little blog post about it.

In addition to the state’s photo and video guys, there were just two journalists: me and a videographer from Channel 13.

O’Malley seized on the opportunity and grabbed the mic. He proceeded to ask questions of Steve Vilnit, who organized the event for DNR, and then had Steve hold the mic so he could give soundbites to the camera.

It was a bit of a risky move — in most settings, that would be super-annoying. And it could have chafed the TV reporter.

But it was a lovely Friday afternoon, a small group, a low-pressure event. The TV reporter just rolled with it. It was kind of funny.

So here you go, here’s O’Malley interviewing Vilnit at the table at Hell Point Seafood: 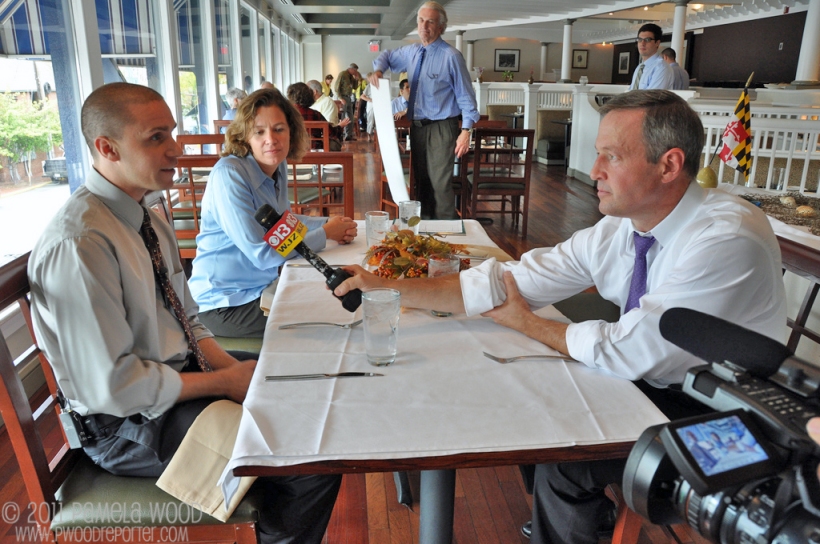 Hey, who knows, maybe O’Malley’s life after politics will involve a gig on TV? He certainly wouldn’t be the first.