Newspapers, like most of us, tend to do the whole looking back/looking forward thing when the new year rolls around.

And it’s always someone’s task to compile a list of the top stories of the year. At The Capital, members of the newsroom submitted our own lists of top stories to an editor, who tallied them all.

I didn’t see everyone’s list, but I’d venture that most of us had at least six or seven news stories in common on our lists. It was usually the last few stories on the list, or stories on our own beats, that we thought were more important, but others may not have thought about.

This year’s list in The Capital includes 10 stories and five honorable mentions. The Maryland Gazette also has a north county-focused list.

You also can check out a year’s worth of awesome pictures* from staff photographers Paul W. Gillespie, Joshua McKerrow and Laura-Chase McGehee. 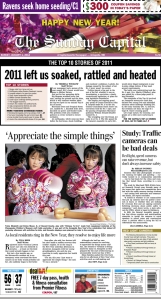 In working on our lists, many of the reporters noticed how many stories were repeats from 2010, including the craptastic economy and politicians in trouble, including County Executive John R. Leopold. I suppose that’s an illustration of the old saying that the more things change, the more they stay the same. (Or, maybe it means we gravitate to the same stories over and over again, and maybe we should seek out new stories?)

I was heartened to see that many of the stories I contributed to made the list, although some of that was due to my stint filling in on the state politics beat for a few months. I was on the beat during a busy time, including the death of former Gov. William Donald Schaefer and the petition drive to overturn the Dream Act.

I also happened to be working when some of the stories happened, such as the Blue Angels cancellation and some of the (too) many deaths on the water. Others were all-hands-on-deck efforts that involved the entire staff, including the earthquake, Hurricane Irene and Tropical Storm Lee.

My only quibble with the list is the same one I have every year, which is that my biggest story — that the Chesapeake Bay’s health continues to be poor despite intense efforts to save it — didn’t make the list.

It frankly worries me a little that the thing I write about 90 percent of the time never makes the list. I guess part of the problem is that, to many, it’s sort of the same thing all the time, like the economy.

I thought 2011 was an interesting year for the Chesapeake Bay. The new pollution diet was immediately challenged in court and concerns about implementing the diet grew throughout the year, even from people who support the effort. Also, out of seemingly nowhere, rockfish poaching through illegal netting became a huge story. Then in the fall, a significant die-off of oysters in the upper bay was discovered. It was so bad that the last remaining skipjack captain on the Western Shore called it quits and sold his boat.

I think the bay is a compelling story. I’ll continue to write about the bay’s ups and downs, the politics of saving the bay, the stories of the people who work on the water. Maybe the bay will make the 2012 top stories list.